As some of my colleagues and I shared a drink to celebrate the end of another week attempting to educate other people’s children the conversation turned to what everyone was planning for Valentine’s Day. A range of ideas were shared including simple nights in watching movies to potential dinner dates and movie dates to the heavily promoted “Fifty Shades of Grey”.

I have mixed feelings about this book/movie franchise. Reqding the first book didnt  convince me it was a good idea to spend my hard earned cash or precious time on the second and third books. For me the book consisted of a string of unrealistic scenarios that titillated a little at first but became monotonous as time went on.

The thing that really got under my skin was how unrealistic everything was. I mean how many people out there have an earth shattering number of orgasms the first time we have sex? How many twenty year old virgins would even consider getting in to a relationship with someone as intense and demanding as Christian Grey, no matter how much money he had? I understand that the reason for the book’s popularity is the whole Mills and Boon style romantic fantasy. I also get that for most people this is the first book they have read that describes sex in graphic detail.Maybe that is why the books took off; not because they are good literature but because it is different.

As part of a promotion for the movie release a local radio station has this week been running a segment featuring a couple whose sex life has wandered away from regular lust filled nights to more mundane and less regular sessions. The deal was that the couple were to spend the week having sex every day, trying something that they hadn’t tried each time. Of course bondage featured as one of the ‘tasks’ the couple were required to complete but the whole focus was more on increasing the intimacy between them based on the alarming statistic that 70% of couples don’t feel there is enough intimacy in their relationship.

At the end of the week the sum up for the couple was that being forced in a way to complete the tasks and make the effort made a difference. This may come as a surprise to you all but I found many similarities between their situation and my own. Yes I am a sex goddess but I am also a full time teacher and a super mother. Sometimes the sex goddess is a role I only put on for other people in the same way that you clean your house for guests and put out the good china.

During this week I decided to take on board some of what the radio station guinea pigs were doing. I made sure I put priority on cuddles and doing the things I know Mr Jones likes. We talked about being more intimate and communicated our thoughts and ideas. I put in the sex goddess for him as well as my other fans. In the end it worked. The little rift that was opening up between us has closed nicely.In true superwoman style I was able to still cover all my other bases, including being a legendary sex goddess for Pet, and still rock the world with my husband. Somi have to agree with the line that was being promoted on the radio station, sometimes the excuses offered for a decrease in intimacy between couples are just that, excuses. If you make you relationship a priority those excuses fade away.

So where does all this fit into Fifty Shades? There are a lot of articles and blog posts that express different viewpoints about FSOG. Many of the ones I have come across are quite negative. My thoughts; There are issues with this book. It does stylise and romanticise bondage in a way that doesn’t help people who are genuinely curious, it does make the abuse of power in a relationship look romantic and desirable and it definitely presents a very inaccurate picture of the BDSM world. But there are positives about it. In a world obsessed with sex but full of people who don’t know how to go about making their relationships more satisfying at least it got some of us talking about sex. At the least it opened the mainstream public’s eyes to the possibility that there is something other than lights out missionary position, once a year sex. It is up to the community of enlightened people now to continue with the momentum and get more helpful, positive stories and information out there. 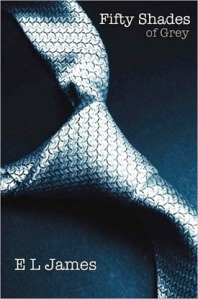