Swinging can be compared to many things. A recent experience made me consider that it is like Pandora’s Box. Before you start it seems like a magical thing that can make everything right with the world. But, like the girl in the classic tale, you never really know what is in the box until you open it and once the box is opened and all the treasures come out you can never put them back in again.

As we were becoming accustomed to Mr Jones and I encountered a couple on a recent outing that were on their first foray into the magical world of swinging. Like us they had been married for a long time. Unlike us they had married young and had missed out on the early sexual decadence that some people are lucky enough to experience in their youth. Like most new people they had no idea what to expect from a visit to a swingers club and, sadly, like a lot of new people they also had a very specific idea of what they wanted.

I am a great believer in living out your fantasy but experience has taught me that that making a fantasy into a reality is difficult. You will never achieve exactly what you envisage in your mind; there will always be someone or something that is not exactly what you imagined. This couple, or rather Mrs Newbie, felt the need to have another penis in her life. Her husband was most obliging and had agreed for her to make that fantasy come to life. On the evening in question there were a number of penises on offer but she was fussy, not a bad thing. The penis she was looking for had to come attached to a young, tattooed, well muscled young man. Oddly enough there were no men matching her description on offer.

The four of us chatted for a while. I explained that Mr Jones and I were in the market for a couple that particular evening. It didn’t occur to me to make it abundantly clear that I came as part of a package and the selection of said package included interaction with all parts of the package. They seemed a little dissatisfied with things and I expected that they were going to leave early. She was that kind of person, if things aren’t going the way she wants, she is out.

This was when the box opened. On my way to the bathroom I passed them sitting at a table and chatting with a single man who definitely didn’t meet the requirements. To my surprise Mrs Newbie, reached out and pulled me towards her asking if She could kiss me. It has been a long time since I kissed a woman but it wasn’t too bad. Before I could entirely process everything that was happening we were in a room on the way to getting naked. She was very focussed on having her first girl on girl experience, even though she had said that wasn’t really what she wanted, the guys were a little awkward. Mr Newbie had his instructions, he wasn’t really part of the action for this evening but he had come prepared to watch his wife be fucked by another man, not engage in the ultimate fantasy of watching his wife with another woman and the expected extension of that fantasy, fuck the other woman himself. Mrs Newbie had explained to me that she was not interested in Mr Jones, something I was OK with because I expected that Mr Newbie was a no go for me.

As things heated up barriers were smashed and we ended up in a situation where Mrs Newbie gave her husband the green light to play with me. It didn’t occur to her that her reluctance to interact with Mr Jones meant that I didn’t really want to play with both of them and leave my husband watching. Some people are a little selfish like that. Eventually she came up for air and what had just happened started to sink in, she commented that she felt really hot and needed a drink and some air. In a normal situation I guess her husband would have realised that this was a sign of trouble. However he was still in the throes of realising that he had, for the first time in a 20+ year relationship come perilously close to an encounter with a vagina that was not part of his wife.

After a very flustered struggle with her underwear, (a tip for newbies, don’t wear complicated or hard to remove clothes, the can look great but they can really kill the mood when you are trying to get them off or, as in this scenario, get them on so that you can make a hasty exit) Mrs Newbie left, unknown to us, the building. Mr Newbie commented that his wife had a bit of  a tendency to flee from situations that she found challenging. He was a little reluctant to leave probably feeling that would be bad form. He wasn’t really wrong but staying when your wife is already in the car waiting for you to come and drive her away from this overwhelming situation is much worse form.

We were not really surprised by the turn of events but we conceded that getting dressed and literally running out of the club without even saying goodbye properly is a sign that things are not OK. Once Mr Jones and I would have worried that we had done something wrong, and speculated way too much about the relationship dynamics of Mr and Mrs Newbie. But the extent of our conversation after their departure was that they were definitely going to have some things to process in the aftermath of their evening. I did go on to reflect that having your first swinging or extra martial encounter can be like opening Pandora’s box. Before you open the lid it can seem like all the wonders of the world are inside but opening the box can uncover many unexpected things some of which are the exact opposite of what you are looking for. Like the box in the story the lid can never be replaced, the repercussions of what you let out can take a long time to process.

The Pandora’s box of swinging has been at time a blessing and a curse for us. There have been many issues in our relationship that have been bought to the fore by the situations that we have found ourselves in but on the flip side we have been very fortunate that we have been able to live out many, many fantasies. In addition we have been privileged to have been able to help other people live out theirs and to help them open the Pandora’s box for themselves in a fun, non destructive kind of way. In the situation of Mr and Mrs Newbie we definitely helped them to open their personal box but I am certain they were not expecting what came out. I just hope that they are able to deal with it and don’t spend the rest of their life wishing that they had left well enough alone. 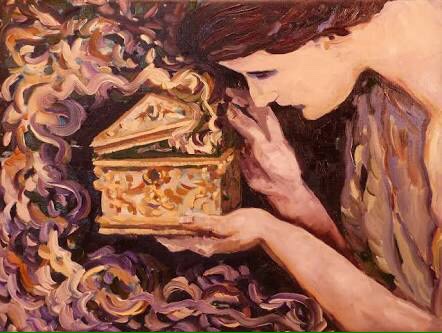